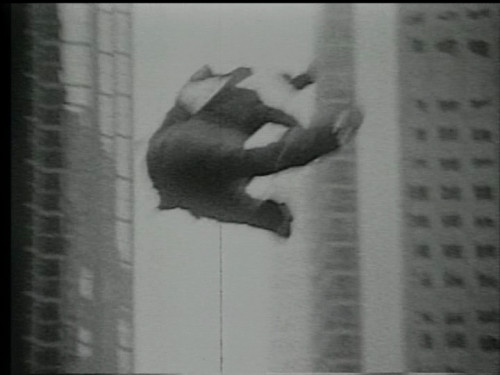 Debtor's Prison: the student occupation of the CIBC is a testament to students who have stood up for the basic democratic right to education. The documentary follows the events that took place on the Canadian Federation of Students’ National Day of Action on January 28, 1998.
As a document of an event, Debtor's Prison presents a sustained, detailed account of the events of the Janurary 28th student occupation well-beyond the cursory glance of the mainstream media’s camera. Debtor's Prison is a savvy assemblage of textual information, interviews, media coverage and street action, interspersing black and white Super 8 and digital video footage.

Following the demonstration at King and Bay streets in Toronto hundreds of students made a spontaneous decision to occupy the CIBC bank tower. Without food, water, or access to toilets students persevered spending an entire night in occupation of the bank lobby. Under the threat of an unprecedented police presence a group of supporters spent the night outside to ensure the safety of the protesters. Debtor's Prison asks the participants for their own analysis and reflections on this momentous event.
Part One of Debtor's Prison focuses on the student cause. In occupying the bank the students made clear that their protest was not only to target the rising tuition fees and prevalence of student loan debt but also the corporate intiatives behind them. Part Two of Debtor's Prison focuses on the right to protest and the tools which students can use in defense of the right to an accessible education. Protesters share their insights on the occupation as a method of activism.

This documentary pays tribute to the spirit of these student activists and their optimisim for the future. The history of student defiance is glossed over by the mainstream media whose representations tell us little has been achieved or won. Debtor's Prison insists that the issues raised by the student’s occupation stay in the public debate.