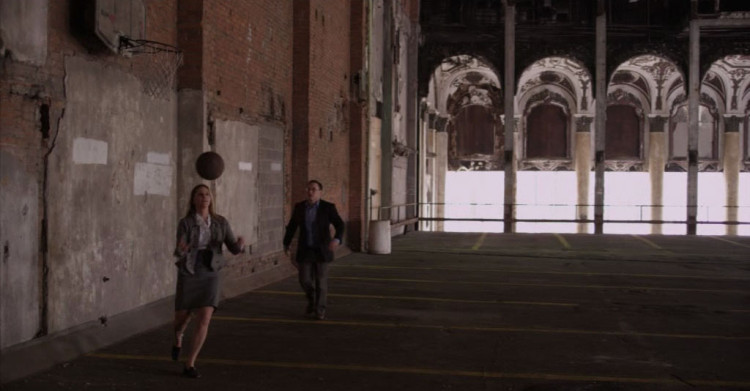 In conjunction with the 2015 Images Festival, co-presented by the Goethe-Institut

Set in Detroit, Ball Spielen (Playing Ball) never dips into the genre of “disaster porn” so typical of many camera-based investigations into decaying post-industrial urban environments. In Corinna Schnitt’s version, things are different, skewed. There is action that doesn’t belong where it is taking place: a man and a woman are playing a game of pick up basketball inside what looks like a crumbling abandoned factory. Neither of them “fit” the scene: they might be on their lunch break from a nearby bank wearing gender-appropriate “business attire”. She is in a skirt, jacket and high heels; he wears a jacket and slacks. All together it is a scene that has been made strange. And it is this strangeness that is at the heart of all of Schnitt’s highly constructed works of art.

As we struggle to make sense of this juxtaposition, something is changing. The more the camera observes the pair and their Beckett-esque game of basketball amid the ruins, the more that the space itself takes centre stage. As the camera pulls back, more and more of the deteriorating structure is revealed. Finally, we see more than an abandoned factory – most certainly emblematic of the collapse of an industry. As it draws to a close, Ball Spielen (Playing Ball) reveals the once-regal, vaulted ceiling of a former grand theatre now pressed into service as a lowly parking lot – an irony not lost on Schnitt in her meditation on Detroit (once called the Motor City at the height of automobile production) where civilization itself would seem to be dissolving before our eyes.

This exhibition is presented in collaboration with the Images Festival, April 9 – April 18, 2015. For more information visit imagesfestival.com.

Corinna Schnitt is a guest of the Goethe-Institut. Schnitt is a German video artist that lives and works in Braunschweig. Schnitt received a diploma in apprenticeship as a carver in 1989 and completed her studies at the Hochshule für Gestaltung (Academy for Visual Communication) in Offenbach. In 1995, she received her masters at the Kunstakademie (Art Academy) in Düsseldorf.

Since 2009, she has been teaching as the Professor for Film/Video Art with specific attention to documentary approaches at the University of Art Braunschweig.