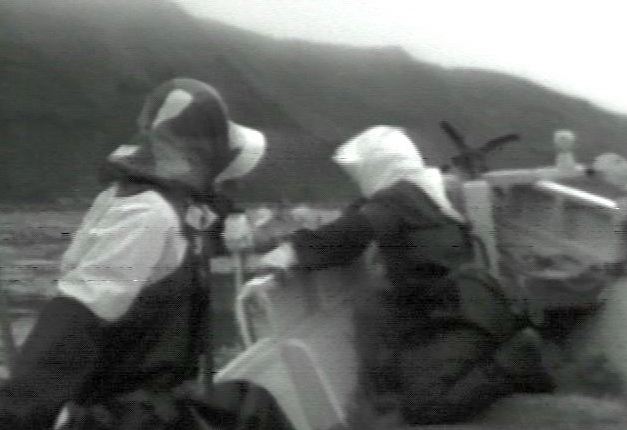 With support from the Japan Foundation Toronto, Vtape and the Toronto Reel Asian International Film Festival are honoured to present a conversation between the groundbreaking Japanese feminist artist, writer, translator and curator Kyoko Michishita and Canadian video art pioneer Lisa Steele, moderated by independent curator Jesse Cumming. The event will include selections from Michishita’s recently restored early video and film works: excerpts from Two Highlights in a Life of Woman (1974), Being Women in Japan: Living with the Ocean (seaweed harvest and drying) (1974), Yoko Ono in Japan: Let’s Have a Dream (1974), Gloria Steinem (1978), and Dinner With a Friend (1980); and the entirety of the beautiful 16mm film Cherry Blossoms (1975).

Vtape Restoration & Collections Management Director Kim Tomczak has begun the historic task of restoring and digitizing Michishita’s video works, while her 16mm films are being scanned at Queen’s University’s Vulnerable Media Lab. Once digitized and subtitled, they will be made available for distribution through Vtape, making these key works of Japanese feminist media art visible again for the first time in decades.

Kyoko Michishita is credited with introducing the ideas of second-wave feminism to Japan when she translated Gene Marine’s A Male Guide to Women’s Liberation in 1975, propelling her into the spotlight as a public figure and spokesperson for this new-to-Japan topic. In 1978, Michishita introduced Gloria Steinem to Japan through an article she wrote for More magazine, and she has translated two of Steinem’s books into Japanese. After meeting the iconic modernist painter Georgia O’Keeffe in 1980, Michishita translated Laurie Lisle’s book about O’Keeffe, Portrait of an Artist, which was published in Japanese in 1984. Referring to each as “a great inspiration,” she maintains a strong friendship with Steinem, and was one of the few allowed to see O’Keeffe in her final years. Michishita’s own writing includes Sensuous Life (1980), a collection of essays on feminism; Farewell to Sakhalin (1995), an account of her family’s experience of the war between Japan and the USSR in Sakhalin after WWII; and the novel The Blue Hour (2008), about the experience of a Japanese woman in the U.S. in the 1960s. Her video Being Women in Japan: Liberation within My Family (1973-74) is in the collection of the Museum of Modern Art (New York), and her other films and videos have been screened at many festivals, galleries and museums across Japan and internationally. Other films and videos include Being Women in Japan: Living with the Ocean (1974); Cherry Blossoms (1975); Two Highlights in a Life of Woman (1976); In My Home Town I, II and III (1976); and Dinner with a Friend (1980).

The program will continue to be available online through April 16 at www.vtape.org