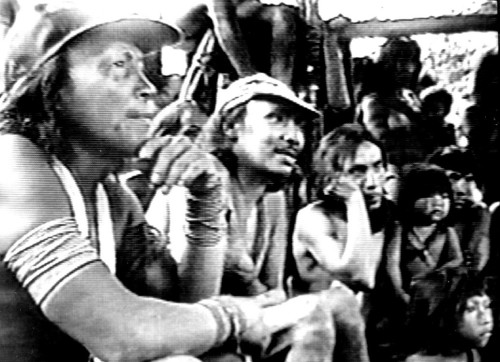 "It was hard before we had television. We had to travel far to meet other people. Today, it's easy because television brings us the person and their way of talking... It's good to know other people through television."

"Show them the pictures of us! In the cities they'll wonder where we live and they'll say, 'Hey, those are the Indians that don't want trespassers on their land - they're the ones who take care of their land.' If you don't show these pictures, they'll never get to know us." - Chief Wai-Wai, 1990

Beginning with the arrival by canoe of a TV and VCR in their village, this tape documents the emotions and reflections of the Waiãpi of Mariry as they encounter their own image and that of others on television for the first time. It shows their reactions and remarks during and after screenings of tape from their chief's first trip to Brasilia to speak to the government, news broadcasts, and videos on various other Brazilian native people; and it records the taping session directed by Wai-Wai for the various villages in his territory.