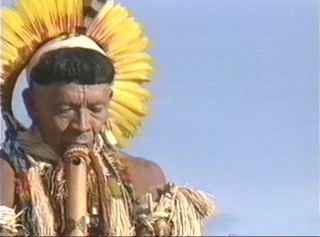 The Banquet of the Spirits (Yãkwa)

A four-part documentary, Yãkwá shows the most important ritual of the Enauênê-Nauê Indians (Brazil). For seven months every year, the spirits are venerated with offerings of food, song and dance so that they will protect the community.

The World Outside The Rock: the Yakwá festivities open with the Enauênê-Nauê preparing for the big fish-catch by making salt, canoes and fish traps.

Dataware's Revenge: groups of men leave the villages for two months and build dams on forest waterways to catch fish as they return from spawning.

Harikare: The Spirit's Host: everyone returns after the fish-catch with smoked fish that will be offered to the spirits and eaten by the villagers until the end of the ritual. In the most spectacular phase of the ceremony, the spirits make their stormy entrance into the village.

The Little Cassava Girl: the Indians cut down and plant cassava root on the collective fields, the field of the Yãkwá spirit. The Indians relive the myth of the girl who was buried by her mother and who transformed herself into the first cassava root.

Virginia Valadão, who died in 1999, was a video producer, with her husband, Vincent Carelli, worked with the Video in the Villages in Sao Paulo, Brazil. This group works to bring an understanding of the power of TV technology to indigenous peoples as an empowering tool in their fight to preserve their lands and ways of life. The Video in the Villages Project is an ongoing series that grew out of the frustrating experiences the native Brazilian Waiãpi had with ethnographic film and video shoots in their villages. The project was initiated in 1985 and has had a profound effect on native image and self image, inter-tribal relations, and relations with white institutions. The project is actively involved in teaching video technology and members of several native groups participate in the production and editing of the videotapes.