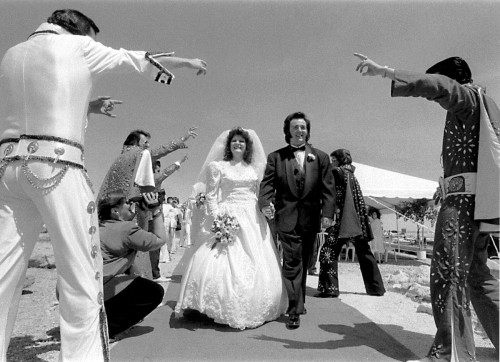 "ELVII": More Than One Elvis

A documentary about the whole Elvis phenomenon - the impersonators, the fans, the quasi-religion.
In life and in death, few personalties have generated the intense emotional involvement of the public as does Elvis Presley. Certainly, Elvis is a unique element of the western consciousness, very much alive in the hearts and minds of young and old. "ELVII": More Than One Elvis is an exploration of the Elvis mythology on both a personal level, through the extraordinary performances of tribute artists and as a societal phenomenon.
"Dressing up in sequined jumpsuits and singing in the voice of a man long dead is a phenomenon that borders on religous", says co-producer/director Michael Glassbourg. "People are always surprised at how many impersonators there are. But when tens of thousands of people show up for an event, you know this is not just a passing fad. What we have documented is a modern day mythology."

"ELVII": More Than One Elvis takes you on a trip through numerous Elvis Tributes and Conventions including one in Collingwood, Ontario which is the biggest in the world; the fortieth anniversary of Elvis's 1957 concert at Maple Leaf Gardens in Toront and a candelight vigil at Graceland in Memphis. These and other landmark events, combined with interviews, make "Elvii" a dynamic and enjoyable documentary on one of North America's least documented cultural phenomena. Funny, poignant, filled with kitsch and throughly engaging, "Elvii" explores the need for spirtual fulfillment by those preaching the gospel of Elvis Presley.