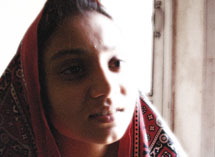 Five years ago, Mukhtar Mai was gang raped in a remote village in Pakistan. Such crimes in the rural areas were and still are very common. Unlike many women before her Mukhtar Mai decided to confront her assailants. Dishonour Defied is the story of how Mukhtar Mai made a life with courage after the tragedy that befell her. She now runs schools for children in her native village. Dishonour Defied is also the story of other women and girls struggling for their rights in Pakistan in the wake of the Mai case.

Azra Rashid is a Toronto-based journalist. After completing her HBA in Political Science from the University of Toronto and a diploma in Broadcast Journalism from Seneca College, Ms. Rashid began pursuing a career as a journalist and a filmmaker. Rashid worked as a lead story writer for Toronto magazine, Business Speak: Women in Business, Finance and Technology, and then freelanced for New York-based TV channel Democracy Now! To work on her documentary, Dishonour Defied, Azra Rashid went back to Pakistan where she also worked as a Producer for a North American channel CNBC and then later assisted with the launch of Pakistan's first English-language news channel DawnNews, as a producer. After successfully completing her award-winning documentary Dishonour Defied, Rashid worked for Omni TV in Alberta as a producer/director for Omni News: South Asian Edition for over a year. Azra Rashid completed her Masters degree in Journalism from Ryerson University in 2010. She is currently developing a documentary on Forced Marriages in Canada.