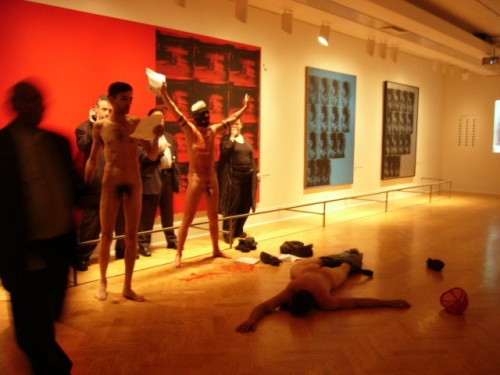 Deadly Gift documents Istvan Kantor’s most recent museum intervention that took place at the Art Gallery of Ontario in Toronto, Aug 4, 2006, in the rooms of the Andy Warhol exhibition curated by David Cronenberg. In front of Warhol’s Red Disaster, Kantor staged a surprise performance that ended with police arrest and a two year ban from the AGO.

The video sums up Kantor’s intentions very clearly through a candid-camera video footage, photographic stills and Kantor’s manifesto, produced and edited by the artist himself. It let’s the spectators take a closer look at Kantor’s life long involvement with of anti-institutional guerilla-art activity that characterizes his performance work since 1979.

Kantor is known for throwing blood on museum walls between important art works. Among his targets were the MOMA, New York, Hamburger Bahnhof, Berlin, Ludwig Museum, Koln, Museum of Fine Arts, Budapest, The National Gallery of Canada, Ottawa, and many others. As a result Kantor is a “persona non grata” in the museum world.

This specific action at the AGO was slightly different from the others. Here instead of doing it alone he had a couple of collaborators turning the piece into a group action. And contrarily to previous actions Kantor didn’t throw blood on the walls in the form of an X like he always did before, but acted himself as a blood-x in front of Warhol’s work.

Kantor’s aim to donate his blood as a work of art to a museum never has been successful. While the AGO’s gallery officials temporarly accepted his donation, a vial of his own blood, later they returned it to the artist as we learn at the end of Deadly Gift video.

Deadly Gift is not only a video document of Kantor’s action but also a self-produced video work that represents his videographic experimentation. In this particular piece Kantor explores the use of text, stills and narration.

An installation version of Deadly Gift was shown at the Museum of Contemporary Canadian Art, in Toronto in july/2007.