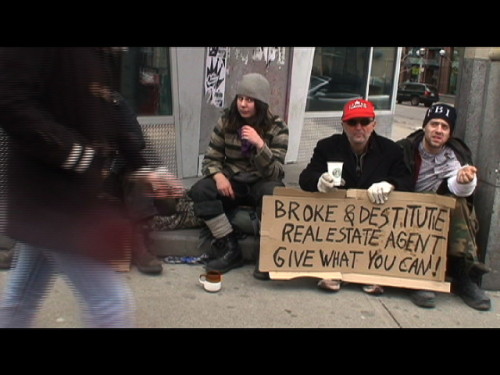 In this autobiographical semifiction director/performer/artist and ardent activist, Istvan Kantor, testifies his lifelong socio-political resistance. Kantor’s engaging and always ironic, neo-Brechtian musical comedy takes us to a noisy, dusty and stinky industrial neighborhood where a conflict in progress takes over the streets due to the invading developers.

Exploring the form of the operetta, Kantor tells his story through the lyrics of his own songs mixed with the spoken words of a narrator. Living in a small industrial area dominated by factories, a local neighborhood activist is trying to fight the ever growing army of developers and save the neighborhood from gentrification. His militant gang marches through the streets with flags and signs promoting the idea that such sensory effect like bad smell and health hazard like dust can keep the developers away.

Kantor’s inclusion of the song in his videos as a main component is almost iconic and adds a popular character to the works. The entertaining formal solution is enhanced by Kantor’s black humour and his intellectually spiced anarcho-poetical commentary on the Rentagon and Broadcast Imperialism.

He employs plundered sounds and visuals to illustrate the narrative lines and convince the spectators with seducing and witty associations. Performing basically himself in the role of the main protagonist, Kantor uses all his skills and talents to constantly surprise and fascinate. He is accompanied by his own children and the recruited close friends and neighbours. His daughter’s birthday coincides with a notice of eviction posted by Rentagon agents on their garage door. Kantor responds in a highly passionate, explosive sermon.

With this video Kantor again makes a point that for him video production and everyday life are inseparable and his main inspiration for the script is always autobiographical and closely relates to his environment.

Recepient of the 2004 Governor General's Award for Visual and Media Arts, the founder of Neoism, Istvan Kantor is a media artist/producer, active in many fields, performance, robotics, installation, sound, video and new media. His work has been described as intellectually rebellious and highly experimental.