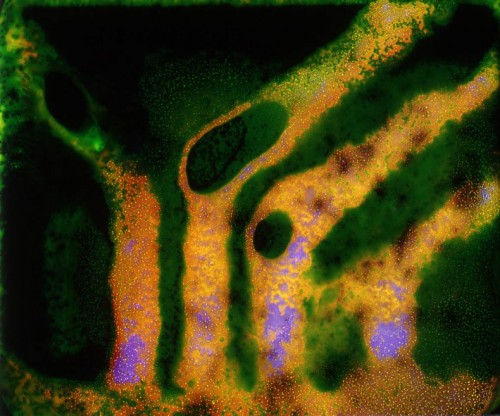 Much like the development of the Painters Eleven group, this project brings together a diverse array of accomplished artists, each with their own style and motivations. These artists are united by modern artistic sensibilities and their collective commitment to creating works of art that experiment with the animation medium, pushing the envelope of artistic expression.

The DVD compilation comes in a beautiful metal case, and includes a handsome 48-page, foll-colour booklet in French and English, containing a curatorial statement by animator and curator Madi Piller, artist's statements on each of the films, an extensive art-historical essay by curator and scholar Chris Gehman, and an interview with Art Gallery of Ontario Chief Curator Dennis Reid by Madi Piller and Patrick Jenkins. Perfect for educational use in Art and Art History, Animation, Painting, Canadian Studies, and other related curricula.

Patrick Jenkins inspired by Kazuo Nakamura
Title: Inner View
Running Time: 2 mins
Kazuo Nakamura's art has its roots in the visual patterns found in nature. His keen interest in science and mathematics was a way of rediscovering the structure of our world. In this animation, Jenkins attempts to recreate Nakamura's work using paint on glass animation. A selection of Nakamura's paintings and sculptures have been animated as if they are being created in front of our eyes, like constantly growing and evolving plants. Set to music performed and composed by Paul Intson, with Ron Korb improvising on flute.

Richard Reeves inspired by Walter Yarwood
Title: The Yarwood Trail
Running Time: 4 mins
Inspired by the artwork and sculptures of Walter Yarwood. This abstract film was created by carving stamps and applying the images directly onto the film using bleach. Frames were then hand painted and a soundtrack produced by drawing shapes along the optical sound area directly onto the film. Images represent the structure and design found in Walter Yarwood's artworks, especially the colours of the acid washed bronze and patterns found in his paintings.

Lisa Morse inspired by Hortense Gordon
Title: The Importance of Hortense
Running Time: 3:30 mins
Hortense Gordon was a teacher as well as an artist, and studied abstract painting under one of the great teachers of that movement, Hans Hoffman. As an artist who makes figurative images, even in what is known as "experimental" animation, I had to do some research not only on Hortense, but on abstract painting. Also, researching Hortense turned up as much about her teachings (and, by extension, Hoffman's) and philosophies as her work, so in the end I felt I was working through the film as a pupil. These are my exercises.

Ellen Besen inspired by Tom Hodgson
Title: STROKE
Running Time: 4:14 mins
Action painter, Olympic paddler, bon vivant of the highest order: these are words that exemplify Tom Hodgson, a man of many seemingly contradictory parts. This film explores the connective tissue that held his life together. Vivid, rhythmic imagery pulls the viewer into a world where the mighty sweep of a paddler's arm becomes the abstracted sweep of paint across a page becomes the primordial, sexual stroke of a life fully lived.

Craig Marshall inspired by Ray Mead
Title: The End is the Beginning
Running Time: 2:20 mins
“My opinion is … the modern painter cannot express his age, the airplane, the atom bomb, the radio in the old forms of the Renaissance … the modern artist is living in a mechanical age … working and expressing an inner world-in other words, expressing the energy, the motion, and other inner forces.” - Jackson Pollock

Working from Pollock's notion that the modern world of atom bombs and destruction obliterated the need for representational art and called forth a new, introspective form of art creation, Craig Marshall takes a Ray Mead painting as his starting point and moves backwards.

Élise Simard inspired by Alexandra Luke
Title: As Above so Below
Running Time: 1:45 mins
Guided by Luke's spiritual and philosophical preoccupations, Simard creates a film that addresses the natural tensions between the extraordinary and the ordinary, and the search to transcend everyday experience.

Félix Dufour-Laperrière inspired by Jack Bush
Title: Strips
Running time: 5 mins
Crossing from pictorial representation to abstraction is, among other things, a matter of organizing the visual information in the image. When the frames from a vintage striptease film are cut in stripes and replaced in various orders, we may witness this transition. Filmstrips, stripes and stripteases all together in a short film about the passage to abstraction. Inspired by Jack Bush's painting Stripes to the right.