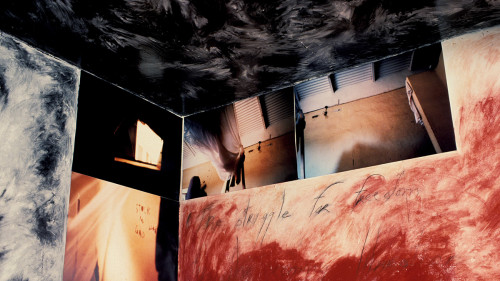 This installation consists of a wall drawing, written text and photographs I took of Fort Lallemand in southern Algeria in 1983. This fort was used by the French during the Algerian War of Independence as a prison for interrogation and torture of FLN / Front de Liberation Nationale members. This hotel room installation was a political statement on the nature of oppression, imprisonment and resistance. Algeria was the first African country to gain independence in 1962, and in 1984 South Africa was still not free and under apartheid. The text on the wall was from my notes, The Wretched of the Earth by Frantz Fanon and The Battle of Algiers by Gillo Pontecorvo.

A combined process was used: wax, pigment and photographs taken in a hotel, Gao, Mali, 1983.

This work was inspired by asylum seekers/refugees and my work with the Lawyers Committee for Human Rights NYC now called: Human Rights First. Since its founding in 1978, this organization has focused on protecting the rights of refugees and asylum seekers. People in flight from political and religious persecution from all over the world come to the U.S. seeking political asylum but instead are jailed upon arrival. This piece speaks of detainment and living in prison like conditions for years when refugees arrive at the airport, thinking they have found freedom but instead are locked up creating more trauma for political asylum seekers.

This room installation was dedicated to Ahsanallah Roashan and his freedom. It speaks of freedom and detainment. In Kandahar, Afghanistan, Ahsanallah was jailed and tortured for his political beliefs. Upon his arrival in the U.S. May 15, 1984 he was detained in NYC at 201 Varick Street, the U.S. Immigration and Naturalization Services Detention Center. His flight to freedom was an intermediate prison sentence. On March 19, 1985 he was deported. We met in the airport in Seoul, Korea on March 31, 1985. Ahsanallah was now an asylum seeker/refugee in orbit being shipped from airport to airport as no country would accept him as a refugee. These notes were taken in the 3 hour talk we shared at the airport in Seoul, Korea. In the words of Ahsanallah Roashan: "I thought I was in prison again. I want freedom or dead. Freedom or dead, that's it. I want to be free. I just want freedom."