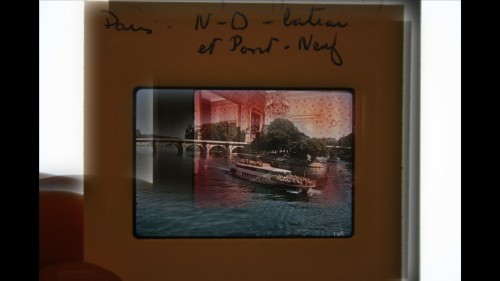 My uncle Camille was a gifted organist, photographer and a very private man. When he died, his photographs and slides were distributed to family members, but there was little context for the material. I received images of Madrid, Rome and Paris. While most of them had a touristic quality, others were more personal. I noticed that some of the colors were starting to fade away. His past, that no one could explain, was slowly disappearing. Soon there would be nothing left. I started to superimpose the images. Doubling them up gave hope that memories embedded there would gather new strength.

Camille Melanson (1917-2003) – My uncle, a priest, was granted permission to pursue doctoral studies in Paris by his church, in the early 1960’s. After 4 years, when it was time to finalize his thesis, his congregation decided that they could no longer pay his way. Faced with a demand to return to his small parish in Canada, Camille decided to leave the priesthood and moved to Montréal to rebuild his life. After a few years he bought a small house. He had the chance to purchase the massive organ from the Parc Jarry and installed it in his basement. This organ had been played during the Montréal Expos home games and it became one of the many keyboards that he owned. At the time of his death, the organ was sold with the house, as it was impossible to remove.