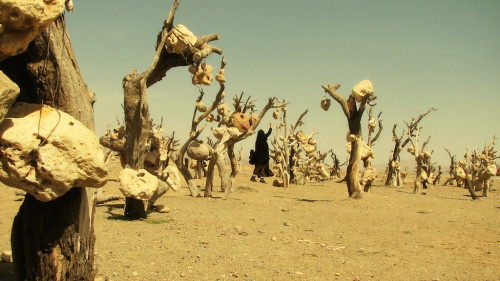 Produced in 2015, new edit released in 2016.
Shahrzaad’s Tale is a story of a lost era and a forgotten star of pre-revolutionary Iranian cinema. Shahrzaad is the pseudonym of the early 1960s popular Iranian cinema actor, Kobra Amin-Sa’idi. Having appeared in more than fifty feature films, also a published poet and a filmmaker, she was the first woman filmmaker in Iran who wrote and directed a dramatic feature film in the mid-1970s. Shahrzaad saw her fortunes plummet dramatically after the Islamic Revolution of 1979. Like many artists in the entertainment industry, who were believed involved in the decadent, un-Islamic, westernized amoral and corrupted form of entertainment of pre-revolution Iran she was banned from the silver screen and TV. Today after more than 30 years of being out of work, in her late-sixties, Shahrzaad is a wandering homeless woman in search of food and shelter.

Through Shahrzaad’s story, this documentary sheds light on parts of Iranian life, culture and history that are still obscure to the international community, revealing the tragic impact of momentous historical change on the life of a remarkable artist. While the documentary’s main focus is on Shahrzaad, it also reflects on the revolutionary changes in Iranian society and cultural norms.

Shahrzaad’s Tale provides the viewer a glimpse into the commercial film industry and the star-driven genre of Iranian popular cinema. Social issues like the treatment of poor and elderly people, especially women, in contemporary Iran are tackled. A tale of an incredible female artist caught in three decades of political turmoil in the cultural landscape of contemporary Iran.