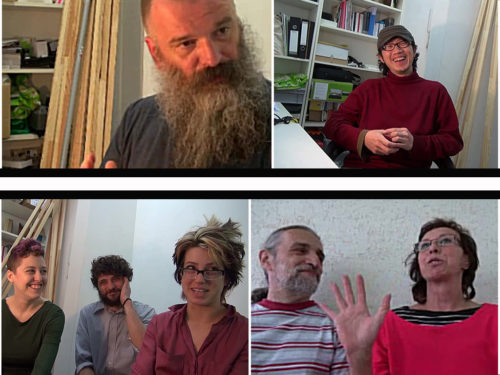 Season 1 of Verb Frau is artist Margaret Dragu's television show and experiment in broadcast. As Verb Frau, Dragu investigates contemporary performance art practice through conversations with international artists. Season 1 is a collection of fifteen episodes edited from VERB FRAU Live Streaming TV Broadcasts during her Big European Tour (Berlin and Belgrade), of May 2013.

1. VERB FRAU TV Episode 1 with Jörn Burmester 27:28
Very first in the live broadcast tv series, and Jörn is late and hung over as the night previous was opening of May Month of Performance Art Festival in Berlin. Verb Frau performs live art-aktions, plays her first Berlin video portrait, and finally after the arrival of the apologetic Jörn, settles down to a very hot chat with this wonderful artist about liminal space between performance and theatre.

4. VERB FRAU Episode 4 with Teena Lange 19:45
Teena Lange talks about the role of the artist/curator, artist/academic, artist/philosopher; how to make art happen and how to watch live performances. After creating a live art-aktion for camera, Teena and Verb Frau discuss the recent rash of re-do-ing and plundering the archives.

8. VERB FRAU Episode 8 with Joël Verwimp 18:43
Joël Verwimp considers the nature/ethics of ownership, language, performance, photography and ethnography while explaining his problem with the concepts of both creativity and improvisation.
Cofe
9. VERB FRAU Episode 9 with Lan Hungh 16:27
Lan Hung articulates why there is no difference between his art-making and curating; how he works with commitment, feeling and materials especially glass; and the thrill of making art in the moment vs planning.

13. VERB WOMAN Episode 12 with Nathalie Fari 17:24
Nathalie discusses her works in public space, being an artist-producer in committed ongoing collaborations, and the body as a central medium to her practice.

14. VERB WOMAN Episode Belgrade with Dinka Pignon & Misa Savic 19:15
(NB: 2 pronouncating symbols on his name)
Pignon and Savic discuss Belgrade’s historic avant-garde art scene from the seventies with art making there today; as well as the nature of deconstruction, conceptualism and conspiracy.