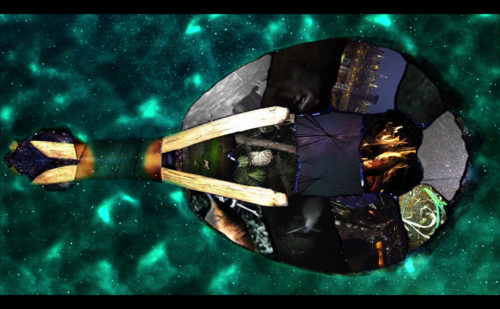 The intent of the video was to depict the Ohenton Karihwatehkwen (The Thanks Giving Address), which gives thanks to all the life forms and beings of the Earth, and the earth itself. I don't believe I can show all of life so I tried to give a Mohawk perspective on life, and as apart of the Haudenosaunee I extended this point of view a bit in respect to the other nations of the confederacy by adding their clans, as it’s said we are all apart of one big longhouse/family.
In the Mohawk creation story the land on the earth grew from the back of a turtle, to give thanks to this being a song is sang using turtle rattles in order to gives respect to it and all the creatures it holds. The turtle rattle in the water is to represent these ideas but the song in the video is not the one used with this rattle, as it is a ceremonial song that’s not usually shared.
The footage on the turtles back is of primarily Mohawk people, places we have a strong connection to, or aspects of our culture. The animals as well as the snipes, herons, hawks are the clans of the Haudenosaunee. The insects and other creatures are native to the Mohawk homeland of portions current New York state and Quebec province. The four times the video changes are to be the four seasons, while also representing other beings like the thunders, grandmother the moon, elder brother the sun, and the twins that we do not see on the earth.