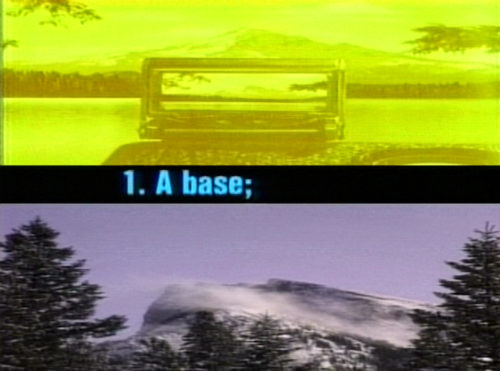 This video explores some of the connections between technologies of military conquest as deployed by the Canadian Army at Oka, Quebec, on September 1, 1990, and similar technologies of conquest, as well as strategies of colonization and race and gender stereotypes, which were deployed in the popular imagination by way of a 1940's hit 'Rum and Coca - Cola' (The Andrew Sisters) and a 1956 science fiction film 'Earth vs. the Flying Saucers.'

In form, the video is a multi-layered experimental ethnography designed for a television audience whose ideas of a 'final frontier' are no longer bounded by the size of the earth but stretch into deep space. It has two major 'formal' objectives: critical analysis and critical entertainment. In terms of the former objective, it focusses on post-World War II American popular culture (science fiction film, popular songs of the period, scenes and symbols of an ideal North American way of life -- the outdoors, the cocktail drink) and 'mixes' these elements of an 'American Imaginary Culture' together and with other images in order that their mythic status is challenged and exposed by in the name of other realties. Because the video is conceived as a mode of 'critical entertainment' its content and overall argument are, in keeping with the spirit of the times, presented in the form of a 'video cocktail' whose consumers might include those white middle - class, middle - aged, post - 1950's space age connoisseurs (those who were for the most part, brought up under the influence of this American Imaginary) or any other persons who might enjoy or venture to savour its 'exotic' bitter-sweet flavour.