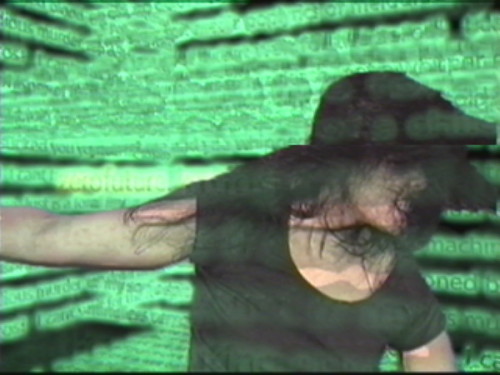 The Spectacle of Noise

RED FLAG 1996, 4:30
Red Flag is a video manifesto put together of live performance documents and quotations from the artist's (Istvan Kantor) note book. Its subject is the anti-authoritarian artist-rebel in eternal conflict with the dogmas of society. Red Flag is part of a media installation created for the project "Beyond the Bridge" dedicated to the life and work of Joris Ivens.

BARRICADES 1992, 11:00
Barricades is a dramatic prophecy that deals with the absurdity of the laws in contemporary societies. It can be called a video-manifesto that integrates documentary images, computer animation and sonic-performance. It captures an ominous, sinister, and frightening moment of urban reality: a park surrounded by police barricades. On June 3, 1991 New York City police seized the Lower East Side's legendary Tompkin's Square Park, ejected the homeless and their supporters, and sealed off the entire park behind police barricades. For the maker of this video it was a clear sign of the coming apocalypse.

JERICHO 1991, 17:00
Jericho is an alarming statement about the decay of technological organization - the city. The title refers to the biblical legend: the divine destruction of Jericho. Istvan Kantor is interested in analyzing the subversive and destructive nature of creation, viewed as a passionate act of refusal. Jericho reflects the rebellious attitude and struggle of Joe Shoe (Joshua of today), illegal alien, confronted by the laws of a human made environment.

BLACK FLAG 1998, 9:00
BLACK FLAG explores the architecture of textuality through the language of confrontation, contest and revolt. It juxtaposes the noise of the body-machine and fragmented passages of words to reflect direct relations of actual political issues (cutbacks, eliminations), to social situations (poverty, daily survival) and individual existence (frustration, struggle). Its' message is summed up in a political slogan, "Down with the government that starves us!", that repeatedly appears throughout the video, in the form of 3D animation and as a refrain of a song, and seems to be the pillar of BLACK FLAG. While making a political statement Kantor is also committed to reexplore the texture and structure of video through non-linear editing, the integration of performance art, treatment of text, accumulation of words, images and sounds. The three parts of BLACK FLAG (The Ambience, The Song, The Concert) are closely linked together and are characterized by sudden changes, jump cuts, multilayered, vibrating texture, rhythmic noises and repetitious movements. Among the performers are Toronto's controversial art-rebel Jubal Brown, performance artists Julie-Andrée T., Louise Liliefeldt, transsexual actor Tanisha Robinson, a group of children and the author Istvan Kantor aka Monty Cantsin? Amen!.