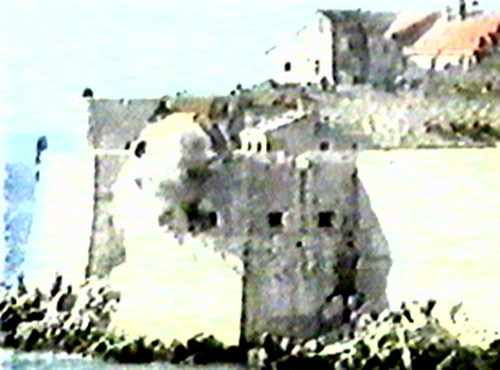 Zev Asher's fascinating collage documentary Rat Art: Croatian Independents focuses on artists working in Croatia, a nation devastated by the war in the former Yugoslavia. (Rat is the Croatian word for war.) Many of these artists, working in the capital city of Zagreb, were relatively distant from the war zone, while others fought at the front lines (legendary punk icon Satan Panonski enlisted in the army so that he could steal a tank), but all were equally aware of the war's effects on their nation. The range of artistic expression covered in Rat Art is impressive: appearing in the film are installation artists, musicians, fashion designers, performance artists, rock video directors, comic strip artists, photographers, filmmakers and more. Although there are enormous differences between these individuals, many of them share a sense that, as one puts it, "time has stopped and civilization has no chance for advance." Ironies abound in postwar Croatia in scenes like a car trip along the "Highway of Brotherhood and Unity" and one artist's statement that "the most important thing in this war situation was to decide on and choose the most comfortable place to die in." With RAT ART, Zev Asher has developed a distinctive style of documentary; his observant, sharp-eyed camera work and quick, intelligent editing give the documentary's subjects an immediate presence and a powerful sense of urgency. (Cinematheque Ontario)