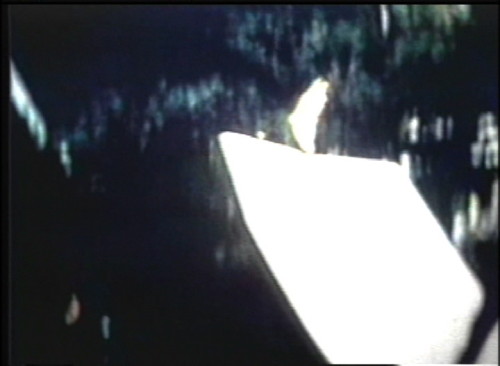 1) Knife Throw (1969), 4:30 mins
The static camera is placed in a room lit by an overhead controlled lighting system. Two flashlights are strapped to my ankles and the other to one wrist. I begin throwing the tree knives at 20 feet away from the panel and move toward the panel at 2 foot intervals, throwing the set of knives to 10 feet from the surface and then move back to the 20 ft. mark. The lights in the room are dimmed a specific amount at each interval until the room is totally dark revealing only light specks given by the flashlights reflecting off the broken surface of the panel. The soundtrack consists of the knives striking the surface and sometimes bouncing to the floor; a woman's voice is heard speaking: 'stick, bounce, stick, stick, bounce' etc., as each knife is thrown.

2) Catapult (1970), 2:09 mins
A disk of wax soaked with lighter fluid is placed on one end of the balanced plywood. I run toward and Jump on the other end, catapulting the wax over my head in hopes of striking a strip of toilet paper, lighting and burning it. (the strips of toilet paper are strung in rows across the parking lot) The performance / film ends when all of the strips have caught fire.

3) Rubberband (1971), 3:21 mins
I am holding a rubber band between my thumbs and forefingers, positioned close to a microphone. The static camera observes my strumming the band as fast as I can for the duration of a Super 8 cartridge of film. the sound is recorded on a tape separate from the film, so the audio which sounds like a drum kind of instrument, slowly moves out of synch with the image.

4) Fork Pairs (1971), 3:35 mins
I strike the first pair of tuning forks on the edge of a table, raise and point them close to the microphone for their audible duration. they are placed in the middle of the frame in back of the mic. and the second pair is picked up repeating the same action. After the fourth pair has completed its duration, the sequence is repeated but this time they are placed outside the fame on each side. There is a third repetition where the forks remain, placed in the middle in back of the microphone. A simple scale progression is completed. The sound is recorded on audio tape separate from the film, so the sound and image gradually move apart. After the last pair is struck and positioned, the image goes blank and the sound continues for the amount of time difference between the image and audio.

5) Nova Scotia Fires (1969), 3:31 mins
Along the south coastal shore of Nova Scotia, I poured a mixture of gasoline and oil on various stone configurations and a long some beaches, lit them an filmed the results. I composed a sound track with a small synthesizer, tuning forks processed through a homemade distortion chamber and spoke in a made up, improvised language.