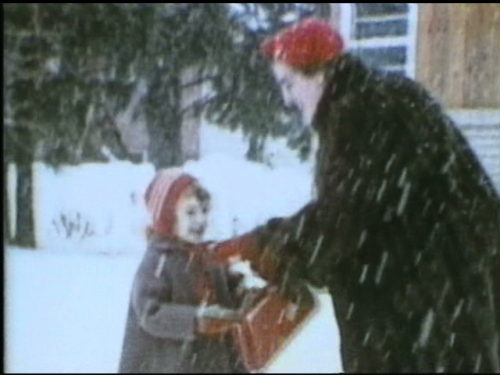 Snow is a five minute video work comprised of a series of film segments, each taken from the last few seconds of footage, from a variety of Super 8 family films. Except for the first and last sequences in the work, each of the segments are strung randomly end to end.

The short scenes in Snow were selected because they still contained the "white dots". The dots suddenly appear, and seem to float over and obliterate the last few seconds of footage. (These dots are literally holes in the film created by Kodak as an identifying tagging system for each roll of film). Anyone who grew-up with home movies in the 60's (most of them a mere 3 minutes in duration) would remember the experience of seeing the dots appear, as they signaled that the end of the film was imminent. In my home movie viewing experience the dots always created a small flutter in one's stomach, knowing that soon the magic happy moments would suddenly come to an end.

It is these last seconds, which make-up Snow, that are brought forward as Barthes would say, as the punctum of the films.1 Barthes explains his notion of the punctum as an "unexpected flash", (which the dots appear as), their emotional impact on the viewer correlating to a deeper understanding of the punctum's effect, as the moment which "pierces me" or creates a "lacerating emphasis."2 Coincidentally, one of the meanings of punctum in Latin is also "little hole".

As we view them, we know there is nothing particularly remarkable in these short segments, ordinary scenes of family living, but because they are in fact the very end of the film, we are presented with ending after ending after ending. The stories remain suspended, something cut-off and never completed. Forty years later, in isolation, these ordinary instances of daily life seem more poignant than ever. The strange juxtaposition of one narrative to the next forces a closer re-examination of each scenario. The dots slowed down appear to obliterate the last clues of the story, creating an excruciating desire to hold onto them; each scene viewed in brief isolation, a small gesture of loss. The sound composition sets a melancholic landscape, at times corelating directly with instances in the films.

Sara Angelucci
by Kristen Den Hartog. C Magazine, Fall 2009, no. 103.
Everything in my life, everything in yours
by Erik Martinson. Art Star 3 Video Art Biennial Exhibition Catalogue - 2007 Galerie SAW Gallery, Oct. 2007.
Postscript to 'An Interview With Michael Snow': Apologies and...
by Michael Snow. C Magazine, Spring 2005, no. 85.
Saskatchewan artists saying it with videos
by Shelia Robertson. The StarPhoenix, Sept. 13, 1997.
Putting All your Eggs in One Basket: A Survey of Single-Shot Film
by Scott Macdonald. Afterimage, Mar. 1989, v. 16, no. 8.