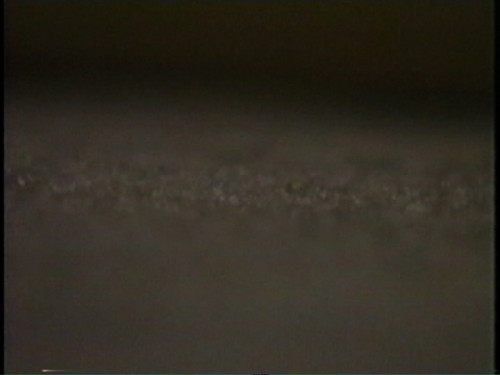 It was difficult for me to make the transition from film to video because I was such a film purist when I embarked on my MFA at Syracuse University. I began with wanting to engage the medium and its properties for themselves, instead of feebly mimicking film. The result was rug. The duration of the video and the hypnotic effect of the camera’s rhythm seem to take the viewer into another dimension, where time is not counted.

"Sarah Abbott has made the shift from film to video by seizing on the differences between the two media with characteristic insight and intensity. At the beginning, rug looks like a very refined minimalist visual study, but then something shifts and you realize you're encountering something bigger, something unexpected. Mysterious, strangely compelling, rug creates an unusual condition of suspense, and works at the very edge of perception in video; the colour changes are exceedingly subtle, and the tape includes colours for which we have no words."
- Chris Gehman, Toronto-based film and video programmer & critic

"You’re waiting on the edge of your seat for something to be revealed. It’s what's implied that's really sexy." - Wanda vanderStoop, Communications Director, V-Tape