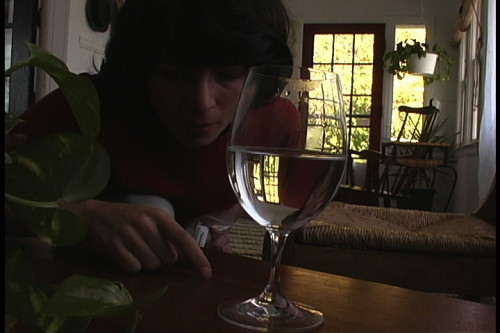 A terminally ill woman describes the circumstances of her love life while images of a domestic interior taken from a single and static viewpoint simultaneously construct and deconstruct the narrative.

Exhilarating changes in costume, gender, and time compression over a short period. There is a vitality in the unconventional confluence of short story, performance art and cinema that stands up to multiple screenings.
- Tom Sherman, Media Artist/Theorist

KNEE LEVEL was inspired by the tendency people have to view others from a single point of view that is often informed by stereotypes and unrealistic cultural ideals. Traditional values and conventional meanings are deliberately challenged and subverted in the tape through the complication of many socially constructed binaries in Western culture, such as male/female, homo/heterosexual, dominant/dependent and normal/deviant behaviors. KNEE LEVEL contemplates what is real versus perceived and causes viewers to wrestle with their personal judgments through the juxtaposition of a linear narration and non-linear visuals. The simultaneous construction and deconstruction of the narrative reflects the hidden seams of the conventional narrative film, which often times is a vehicle that reinforces stereotypes and binary ways of thinking by re-presenting fixed ideologies and illusions of truth.