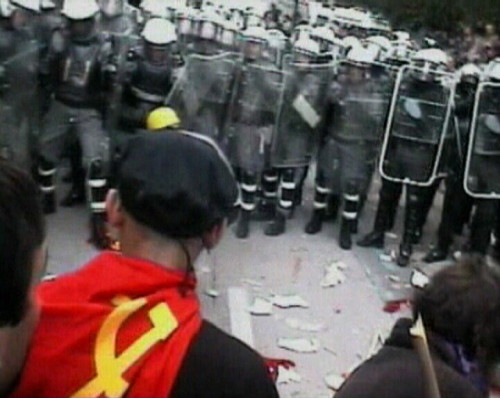 The video "This is what democracy looks like!" thematizes the events of 1 July 2001 which took place surrounding a demonstration against the World Economic Forum – a private lobbying organization of major capital – which was meeting in Salzburg at the time. This video gives insight into the course of events of the first "anti-globalization demonstration" in Austria, held subsequent to the demonstrations in Seattle, Prague, Davos, Quebec, and Gothenburg, which all received a great deal of media attention. In this demonstration in Salzburg, which was forbidden by the police, 919 demonstrators were encircled in a police blockade and detained for over seven hours.

In the video anti-capitalist demonstrators take the role of active spokespersons, contrary to dominant media representations that denigrate them as either naive or violent chaotic rowdies. Conversations about the events in Salzburg were carried out with six demonstrators.