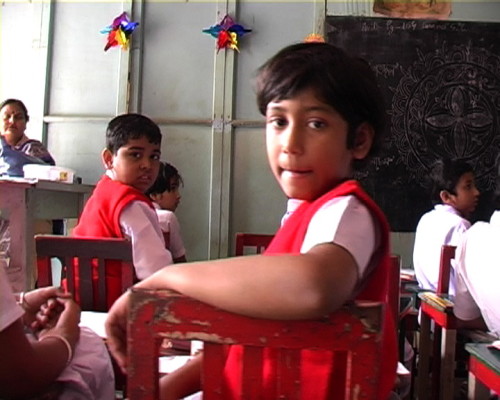 Colony is primarily set in Batanagar, India in 2006. Batanagar is a crumbling outpost of the Bata Empire. In its heyday 16,000 workers lived and worked together for the Bata organization. The Czech-born shoe manufacturer Tomas Bata established his company as an early multi-national company alias-family business in 1894 with the aim to provide shoes for the people of the world. He envisioned a world where no man need go barefoot and he employed several thousand to make this a reality. His legacy has been passed down the generations to Thomas Bata Junior, his grandson, now the current C.E.O. Bata was an experiment in social care as a means to increase profit - in other words, of merging private and social lives with the work people did.
The Bata 'family spirit' extended to the workforce who produced the shoes in all the satellite outposts of his empire. In Toronto, Sonja Bata speaks about the ideals; in Sri Lanka we see factory workers in their reality, and in England a retired worker evokes what is was like to be a Bata worker, and in Zlín, the former headquarters of the Bata empire are evoked by the remains of the mother factory scarred by communist disavowal.
This film explores Bata's impact on several individual lives and on the communal surroundings through paternalism and, materially, modernist architecture. The film's aesthetic, that hops from site to site and shot to shot, offers pockets as a visual version of the bubble of the colony. The characters are all connected to that past. They guide the viewers through the merging of past and present in memory. The film's coloration conveys this mixture. That idyll of living and working together has fallen by the wayside. This is a tale of a lost system of production, of colonization and hierarchy and the politics surrounding the work of individuals whose lives became entwined in a global vision. The film opens but does not answer the question so crucial to the contemporary world: is the overcoming of colonialism ever able to avoid neo-colonialism? The film is political in its critical presentation of both past ideals and contemporary alternatives.