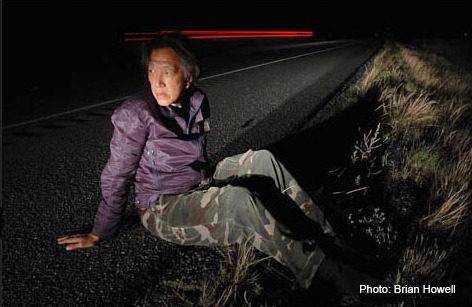 Unplugged is an album of 16 video sketches: works-in-progress, rough cuts and recent collaborations. Culled from Wong's 100's of uncatalogued tapes, this collection of ‘off the cuff' includes recordings made in Beijing, Montreal, Vancouver, New York City, Minnesota, and Nicaragua. This preview is the first in a series of new pieces.

PLAYLIST
TV Frames Vancouver - this made for tv series (Bravo-Chum TV) visits Wong in Vancouver. This clip introduces us to Wong at his solo exhibition at the Vancouver Art Gallery (2002), at his live/work space on Main St., and a tour of the downtown eastside. TV Frames provides a context and location for Unplugged.

EAT (Mainstreet Dinner For The Homeless), 3:00, 2005, individual ordercode: 168.30
Originally created for the EAT issue #5 of www.horizonzero.ca. This included a live internet dinner party. EAT is a roving eye view of the homeless occupying the public sidewalks surrounding the vacant Woodwards Building in the downtown eastside. The tent city becomes both an eyesore and rallying point for the plight of the homeless and disenfranchised in Vancouver's booming real estate market. Intercut with the images of poverty are Wong as chef preparing a gourmet meal along with the houseboy cleaning.

FIRE, 5:00
As police attempt to shut down an eviction party at a house destined for demolition, the punks retaliate by setting fire. Riot police clear the area. A second night of fires seals the fate, the block of houses are immediately demolished to make way for the new condominiums.

DIAMONDBACK, WELL and NINO were recorded in Nicaragua.
They feature the shenanigans of Rick Erickson and Paul Wong who have been friends since high school. This will be a series of moments watching this odd couple bumble thru the world. Dramatic highs and retarded scenes.

The trilogy SALLY, CHELSEA HOTEL Room 207, and PERFECT DAY will be ready for release Jan. 1, 2008. They can can be programmed as individual works or presented as a trilogy of single channel projections or exhibited as an installation.

SALLY, 6:00, is a love song. We gaze fixedly on the beautiful Sally as she drives past the portrait of Mao on the gates of the Forbidden City at Tienamen Square. She entrances us as she records her mirrored reflection in a sumptuous suite at the China Club. In an ancient garden she rotates, we spin in her dizzying aura.

CHELSEA HOTEL Room 207, 5:00
Crack induced euphoria amplifies a sexually charged environment. The cameraman is implicitly involved in the activities of two men in tighty-whities (one black/one white). Described by viewers as both horrific and so full of humanity. This work is not what-it-seem or is it? Featuring Attila Richard Lukacs with Jermaine.

PERFECT DAY, 7:30, 2007, individual ordercode: 168.34
A riveting look at a day in the life of the artist (recorded and edited over 24 hour period). This poignant self-portrait is pathetic and hilarious, a brave and truthful reveal of Wong's private other. The title and the soundtrack are references to Lou Reed's song of the same name Its A Perfect Day.

Running In A Maze, 3:00, 2007, individual ordercode: 168.35
An abstract video recorded in the maze created by Charles Rea as part of a visual arts exhibition at the Belkin Satellite Gallery in Vancouver, 2005.

STORM, 3:00
Recorded through a windshield.

HORSES, 3:00
Loop piece to be developed.