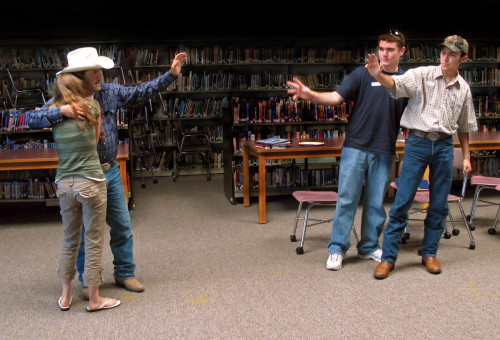 The U.S. Department of Homeland Security considers the town of Playas, New Mexico a useful location for simulating domestic terrorist attacks because it contains over two-hundred homes, a town store, bowling alley, two churches, and a baseball diamond—but almost no residents. The town was built in the 1970s by a big mining company, Phelps Dodge, to house copper smelter workers and their families. In the late 1990’s, Phelps Dodge closed the smelter, laid off its workers, and told them to move out of town. Playas became a modern-day ghost town, with desert wildlife sauntering its suburban cul de sacs. In 2004, the Department of Homeland Security financed a local college’s purchase of the entire town. Playas now serves as an “Any Town, USA” stage set for training law enforcement, emergency crews, and the military to respond to incidents of domestic terrorism. Local people who live in the economically depressed region, most of whom used to live in Playas and worked at the smelter, are hired as day laborers to play the roles of terrorists and victims in simulated bus bombings, suicide bombings, and hostage scenarios staged on the streets of what was once their town. The simulations enact a vision of the future where civic space is permanently militarized. Their goal is to train participants how to behave in that future.

The filmmaker collaborated with several of the terrorist/victim role-players to stage scenes that tell the story of Playas, as they see it. In a local high school library, they act out building the smelter, life in Playas during its hey-day, the lay-offs and goodbyes, and their current role in staging simulated terrorist bombings. Without comment, the film juxtaposes these homespun scenes with the government-sponsored simulated terrorist attacks, video documents of explosives testing, and wild-west shoot-outs staged for tourists at another nearby ghost town. The film creates a space for viewers to contemplate how the region’s past and future are currently being imagined and enacted.