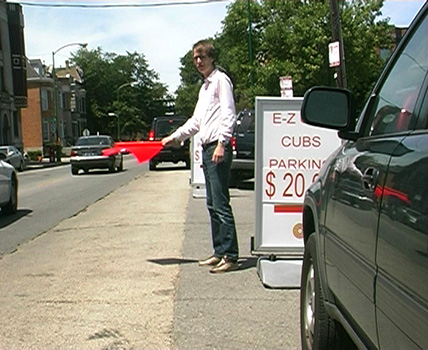 Chicago, Summer 2004: a man with a red flag stands on the side of a paved road – at first glance, he looks like a Formula One official. But on closer view, one notices that the man has set himself up in front of a parking area. It looks as if he’s regulating traffic with the flag. He looks right, then left, then right again, lifts the flag and lets it drop with a quick, decisive movement. He makes a sideways gesture as if he wants to grant someone the right of way. He gives the stop sign as soon as he notices that one of the cars driving by is braking. He hails another car’s acceleration and confirms the driver’s correct behavior with three fast moves of the flag.

It doesn’t take much to understand that the young man is not controlling traffic, but rather that the cars that surround him are manipulating him. He seems to be determining their maneuvers, but in reality he’s commenting on them. He’s a meaningless figure on the margins of what’s happening, a commentator without an audience.

The artist duo Boisseau and Westermeyer have worked together since 1996 and have invented the protagonist F., who appears in almost all of their videos. As is the case with many other contemporary artists, Sylvie Boisseau and Frank Westermeyer often play the most important roles in their films themselves. Whereas Bjørn Melhus, Luigi Ontani or Cindy Sherman disguise themselves and always invent new roles so that they are mostly barely recognizable, F. (always played by Westermeyer), remains consistent and dresses like any young modern man. But F. is not only a man free of surprises, an average person – he’s a person with no characteristics, like a gap, an empty space, a non-person, a man without qualities. You observe him and notice how the meaning of the individual is overestimated in today’s society. You understand to what extent we are influenced by the conditions under which we live, how much autosuggestion it takes to believe that someone can decide something for him- or herself. - Julia Draganovic, curator, Naples