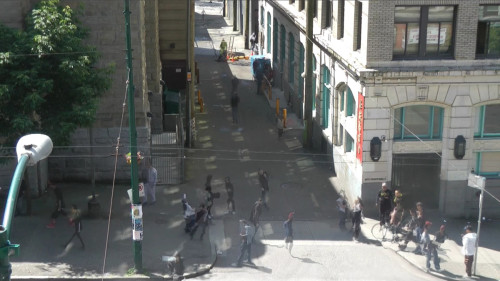 “I found myself drawn into Solstice and its numerous narratives. The guy standing on the corner: what’s he doing? I thought to myself. His head swivels left to right, right to left, left to right. He’s scanning the landscape around him, looking for someone, something. Then he’s gone.

The same kind of thing happened over and over again in slightly different ways as I watched. Why are those two going behind the telephone pole? They’re trying to hide something, I bet. And what about the guy lying on the pavement behind the dumpster? What is he doing?

Solstice is constantly moving. Like the city, it literally never sleeps.

Shot on the longest day of the year in available light, Solstice is 24 hours condensed into 24 minutes. It records a day in the life of Crack Alley, the back alley off of East Hastings behind Carnegie Centre known for its illicit drug deals and open drug use. The video is projected onto a free-standing wall so the image area is big enough at four metres by three to have a real presence in the gallery.

The video captures the choreography of the street in one long, uncut scene from a stationary spot on the third floor across the street on East Hastings.

Solstice is a little different from the ubiquitous time-lapse videos on YouTube and other sites. While the camera rolled, it took a frame every 10 seconds. Like other time-lapse films, movement by people and cars is depicted at a sped-up rate. But unlike time-lapse films, the software (Aftereffects pixelmotion filter) makes up its own decisions on how to render movement. It fills in the gap in the intervening eight seconds between frames. In a sense, the software is a co-creator with Wong.

This creates unique effects. As figures and vehicles moved, they looked like two-dimensional creatures in a three-dimensional world. Think of the flat players in table-top hockey. Because the recording isn’t a continuous record of the 24 hours, figures don’t smoothly move in and out of the frame. They appear and disappear. But they don’t do so in a sharp, jagged way. They look like they leak out of and are absorbed back into the urban landscape.

As a title, Solstice plays against the usual meaning of the word. Referring to the longest or shortest day of the year, solstice suggests a natural cycle not usually associated with a gritty, urban scene.

Solstice records the life of a street that’s part of what makes Vancouver the kind of place it is – just as much as the Seawall and Wreck Beach. Works such as Solstice make me think of Wong as a contemporary version of what Charles Baudelaire called, in the 19th century, a passionate spectator: an artist whose work is intimately connected to the city. In Solstice and much of his other work, Wong substitutes a camera for a paint brush to record what Baudelaire called the “fugitive and the infinite.”

I don’t want to give the impression that Solstice is a restful, calming video. It’s not. It may be mesmerizing to watch but it’s full of anxiety and restlessness. There is no resolution to the activity, just a slowing down and speeding up as the times of the day change. The work is accompanied by an electronic soundscape by Thomas Anselmi and Phil Western that’s as insistent as the hum of traffic.

Solstice is a video that’s as accomplished as any you’ll see in an art gallery – public or private – in Vancouver.” – Kevin C Griffin, Vancouver Sun, February 12th 2014