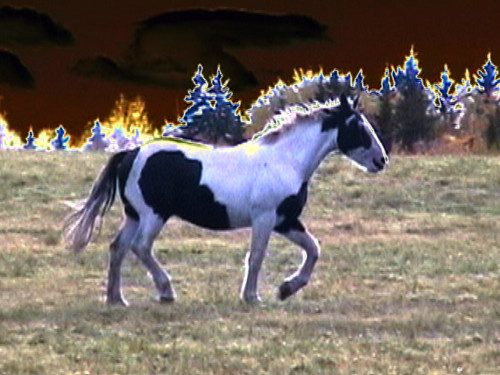 The piece begins with a description of life in the winter of 1868 four years after the Sand Creek Massacre and just following the signing of the Medicine Lodge Treaty. The narrator was among those who resisted signing the Treaty. But this was the winter of 1868 and people were tired of fighting and tired of death and were looking for peace wherever they could find it.

While the narrator does the best job at recounting the events that transpired that day, a brief synopsis could go a little like this: While hunting out one day the man came upon three antelope and managed to kill two. When the man failed to kill the third animal, the antelope turned to look at him and spoke. He uttered one word: “Soon.” This word would set an entire series of events into motion.

In this version, Custer doesn't win but neither do the Indians. Rather, it is the beasts of burden, the Horse People, who change the course of history. The man recounts that one by one, during the battle, the horses begin to rebel. Violently throwing off their riders, they fight off the soldiers with their teeth and hooves, striking and biting and kicking. As a result of their intervention those in Black Kettle’s village are spared certain death. Their resistance costs the Horse People dearly and there are many casualties. Their intention, as we later learn, was not simply to win the battle, this was only a small part of the equation. Rather, the event was orchestrated to get the Cheyenne to listen to what they had to say. The Horse People, as it turns out, would foretell an omen for the future: a time when new technologies would radically alter the course of human life, all but severing our relationship with the natural world and its medicines. The people of the world, in only thinking of themselves and their present needs, would remain all but blind to these shifts.