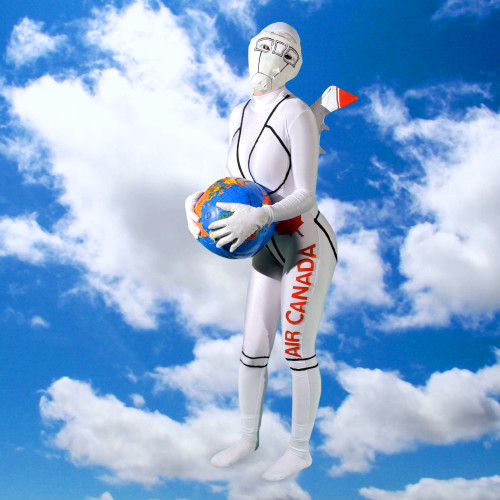 Air Canada gal is an exploration of the Internet sub culture called “Anthro Planes." This performance/video piece is part of a multimedia exploration of the strange and sometimes provocative world of video game and anime fandom. Anthro planes can be characterized as drawings or animations of anthropomorphized and sexualized airplanes. The representation of anthropomorphic machines has been around for as long as animation, and even before in illustration; it is not a new concept. Anthro Planes has connections with the better known “Furry Fandom”; the sub culture interested in depicting anthropomorphic fictional animals with human personalities and characteristics. Anthro Planes are almost always represented as women and are sexualized. This has links to the practice of giving boats, cars and airplanes female names.

Ben David costumed herself as an Anthro Plane in order to understand the online fan community in a personal manner. Often content involving fetish is deemed strange/not relatable and is therefore dismissed. However, there is something interesting happening with this phenomenon that isn't a singular isolated occurrence. The personification and sexualization of non-human forms is a reflection of the culture around it and is worth investigation. Without our current internet culture, the emergence of "Anthro planes" could not be possible. It relies on the bringing together of individuals with a very specific interest from around the world. It almost exclusively lives online.

While researching, Ben David noticed that each “Anthro plane” had a country branded on it, but that a Canadian plane was not present. To make the video relevant to herself, she decided to brand her fictional airplane as “Air Canada Gal.” In doing so, she created a Canadian representative to enter into this international image-sharing exchange and discussion.