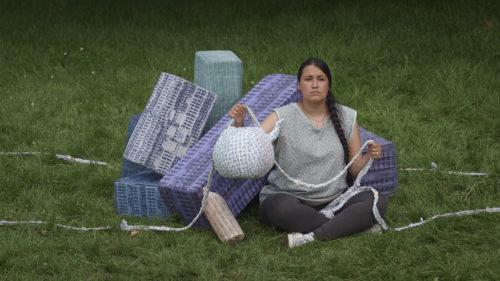 By These Presents: “Purchasing” Toronto

By These Presents: “Purchasing” Toronto is an absurdist examination of the Toronto “Purchase”, a controversial treaty between the British and Mississaugas covering much of modern-day Toronto. Organized in three acts, By These Presents uses dance, large-scale puppetry, and humour to chronicle the opening chapter of the city’s colonial history.

The plot centres on the treaty negotiations of 1805, where British officials covertly extended the boundaries of the Toronto Purchase lands beyond those allegedly sold in a poorly documented meeting in 1787. A group of Mississauga negotiators - with back up from a 5-foot beaver - confront the Queen’s representative, demanding that he justify the Crown’s unscrupulous dealings.

Shot at historic Fort York and along the contentious boundaries of the “Purchase”, By These Presents features an all-Indigenous cast whose visceral performance collapses past and present, revealing the city’s colonial foundations. With a script drawing from treaty council minutes, Mississauga petitions to the Crown, correspondence between colonial officials, and interviews with Indigenous knowledge keepers, the film reveals the calculus the British employed to diminish the Mississaugas, divide them from their Haudenosaunee allies, and acquire their lands at rock-bottom prices.

By These Presents is the history lesson you wish you’d got in school. But the film leaves us with more questions than answers for Indigenous and non-Indigenous peoples who want to honour treaties. How do we “honour” a dishonourable agreement?
By these Presents was first presented at the 2019 Toronto Biennial of Art as part of a site-specific installation on Etobicoke Creek. The creek, which has never been ceded, marks the disputed boundary of the so-called Toronto Purchase. It is now subject to a water claim by the Mississaugas of the Credit.

Media for By These Presents
A New Kind of Land Acknowledgement – canadianart
https://torontobiennial.org/work/jumblies-theatre-arts-with-ange-loft-at-small-arms/

This versatile work is available for presentation as a 30minute piece or a three-channel video installation. The first act is available as a 10min stand-alone piece.