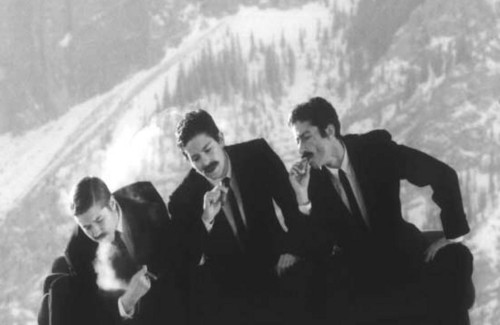 Four guys on a couch. They're on top of the world. They think alike, they strut alike, they piss in perfect sync. Except one of them's slipping up. Despite his best efforts, he's out of sync. They try to correct him. They give him another chance. But Jack can't get it right.

Filmed at the Banff Centre for the Arts and directed by John Greyson, Herr is a five minute adaptation of Joe Laughlin's 1997 dance piece Harold, Billy, Stan and Jack. Set in an abstract industrial space of plunging pulleys and flying couches, the dance is a bitingly funny dissection of gender conformity. Performed by four women dressed as men, the choreography is inspired by everyday male gestures (jaw stoking, shoulder punching, crotch grabbing) and elaborated into an intricate, jaw dropping spectacle of masculinity lurching out of control.

These stereotypical and banal gestures are made breathtaking through synchronization, repetition and split second timing. The dance resonates because we keep forgetting and then remembering that we're watching women (playing men). The dance transcends mere satire to become finally troubling and disturbing: the logic of the four is too brutal, their club's initiation rites too lethal. The couch becomes a central fifth character: trampoline, cage club house and finally executioners bench; a stage they bounce maniacally on and off of, trying to simultaneously escape and embrace the 'destiny' of their mustachioed sex.