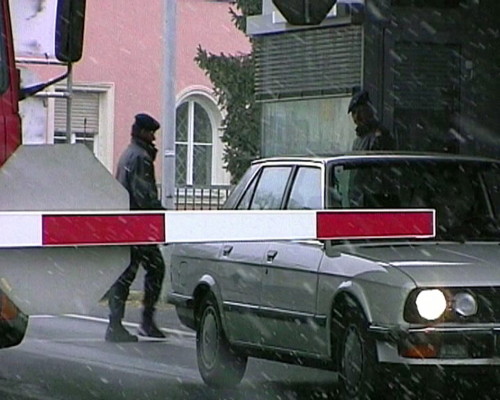 The European Union member states' restrictive immigration regulations mean that there is almost no chance to legally migrate to the EU and reside in a member state. For those who want to enter, making use of border crossing services is often the only possibility for penetrating "Fortress Europe."

The video "Border Crossing Services" ("Dienstleistung: Fluchthilfe") highlights positive aspects of terms such as "smuggler" or "trafficker" which have been given a negative connotation through the dominant media discourse. In contrast to the widespread model for representation, the actual act of "smuggling" is not presented as a criminal exploitation of asylum seekers. Instead the video discusses the service character of this business and confronts the hegemonic model for representation of so-called trafficking and migration.

Based on conversations carried out in Germany and Austria with migrants and persons involved in the political left, the basic theme was separated into four sections for analysis and critique: "Who is allowed to migrate?," "Celebrating and excluding," "About border crossing services" and "Against racism."
A representative of the activist group "Taxistas" describes how taxi drivers in Germany are criminalized as "smugglers" for transporting illegalized people. The section "Celebrating and excluding" is a "short report" about the latest war machinery for border security, eagerly presented by soldiers at a festival of the federal armed forces at the Heldenplatz in Vienna on the Austrian national holiday. In the section "About border crossing services," a conversation with a leading border patrol officer in Frankfurt an der Oder shows contradictory arguments which are used to try to legitimize racist mechanisms for exclusion.