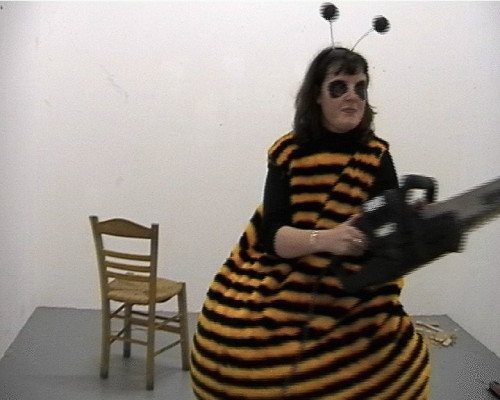 This work is part of a series: Bastard Bee, Pissed off Pumpkin, and The Lecture (Bemused Bear)

My work challenges reality and imagination; through the use of video and performance I have created a world for myself a parallel universe where I would prefer to belong. In exploring my naivete, I have discovered a darker side; feelings that lay undisturbed and dormant before, have now risen to the surface. In the form of peculiar child-like characters, the characters at the beginning look innocent, lost and humorous but you soon discover to have hidden depths. The costumes are a disguise that is needed to allow myself to be brutally honest, like when a child puts it's hands over it's eyes and thinks it's hiding from the world, when I'm in disguise I am still retaining my innocence. Pissed off Pumpkin and Bastard Bee have been taken out of their natural environments and placed in an institution where for some reason or other they just don't belong. Bastard Bee, Pissed off Pumpkin, and The Lecture (Bemused Bear) are filmed in very simplistic ways so the emphasis remains on the performance of the characters.

My work is performative video art and I consider myself a performer as much as a video artist. Bemused Bear is an ongoing performance. I assume this character whenever I feel out of depth and uncomfortable. This may be due to feeling inferior or just because I generally don't fit in. The costumes are made by myself and are not realistic representations of things, merely the creations of exaggerated childhood imaginations. The videos are an internal protest against humanity, the treatment of one another and my frustration fabricated by the pompous art world. These characters are displaced as I am, but there is no exact place where they and myself belong.