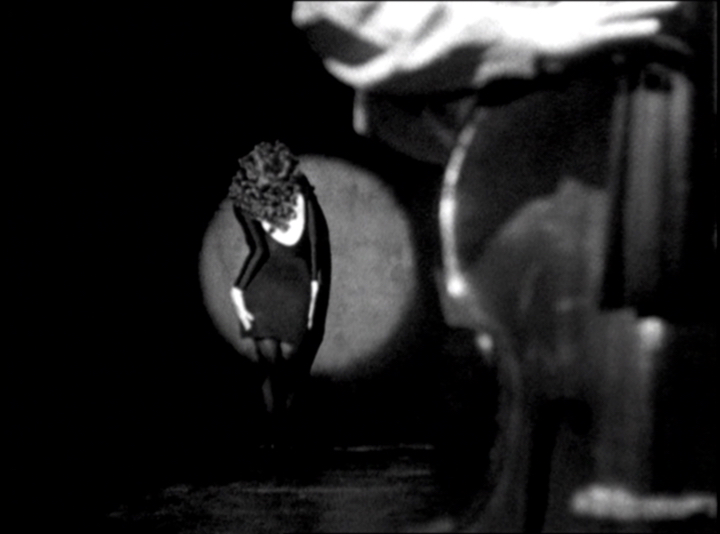 Inspired by the fairy tale “Rumpelstilzchen”, this black and white film is a surreal story about a bass player who agrees to trade his bass with a magician in exchange for the woman of his dreams but later tries to forego paying the price.

Long Synopsis: The setting for Rumpelzwitter & Bassstilzchen is the fairyland of "Zwitters", beings who look like women but have mustaches. The main character of the film is Bassstilzchen, a male musician who plays his double bass in accompaniment to the dance of a Zwitter. He, like the other men of this fairyland, longs for a partner unlike the Zwitters.

One night a magician, Rumpelzwitter, appears in Bassstilzchen’s chamber and inquires about his sadness. Bassstilzchen reveals to him his desire for a gentle and loving companion. Upon learning this, Rumpelzwitter weaves a woman with his knitting sticks and once the speedy task is accomplished he asks for the musician’s double bass in return. Bassstilzchen accepts but begs him to be allowed to keep the bass for one more performance. Rumpelzwitter agrees.

On his next show, the musician appears with his newly acquired female partner. When the dancer reveals she has no mustache, the evening turns into a riot as the audience storms the stage: the Zwitters, outraged and the men, burning with excitement.

The couple flees town, taking the bass along. Furious about the broken promise, Rumpelzwitter steals the bass while the couple is sleeping on the top of a hill. Some time later, the girl accidentally discovers Rumpelzwitter playing the instrument happily under a tree. She then returns with Bassstilzchen who claims back the bass. Rumpelzwitter offers no resistance as the musician takes his beloved instrument and walks away without any attention to the girl. The girl follows him with happy childish jumps first, but then stops and looks at Rumpelzwitter who is grinning after Bassstilzchen in triumph. Presently, she touches the top of her upper lip, turns toward Bassstilzchen and follows him with firm steps and tightly closed fists.