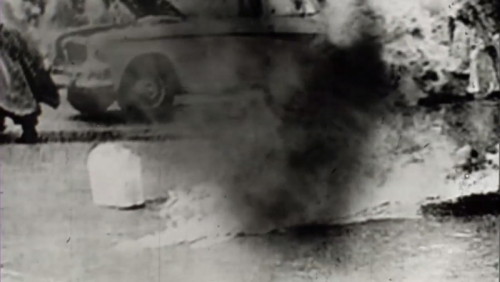 Using the Zapruder footage of the Kennedy assassination, the Maysles brothers film Gimme Shelter, and a television series opening credit sequence as a conceptual framework, Dramatis Personae examines the Black Star Agency's photographic archive during the time of the artist's coming to consciousness in the 1960's. The source material signals the search for meaning in the precise moment the bullet inters Kennedy and leaves the world in shock and as we watch Jagger as he tries to find the instant the knife kills the Woodstock Nation. Dramatis Personae takes the form of a B&W experimental film of the period and re-animates iconic photographs from the era's image bank. Names that appear at the beginning of the piece act as a riddle asking the viewer to try to solve. I will give you a clue: 'You probably know who most of them are, you just don't know their names'.
© Stephen Andrews, Courtesy of the Ryerson Image Centre