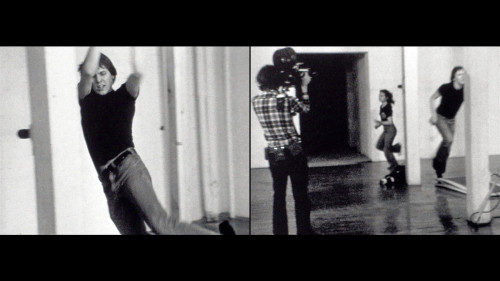 Crash Points 2 is the second of two films based on Dudar’s performance Crash Points , the culmination of his running-based pieces. It incorporates in-and-out-of-sync concepts which originated in his still earlier walking-based pieces, plus newer track-and-field concepts. The piece could be described as a choreographed, noncompetitive track-and-field event in which the perimeter of a gallery is used as a running track. Hurdles coming down (‘crash points’) within the piece trigger interactions between the performers.

In version 1 of Crash Points, the single camera became part of the choreography by taking cues from the two performers. Crash Points 2 employs two cameras, which each track a performer. The results (originally shown on two screens) are formatted here as a split screen. The two images, sometimes in- and sometimes out-of-sync, create a new layer of interactivity. The medium becomes part of the choreography.