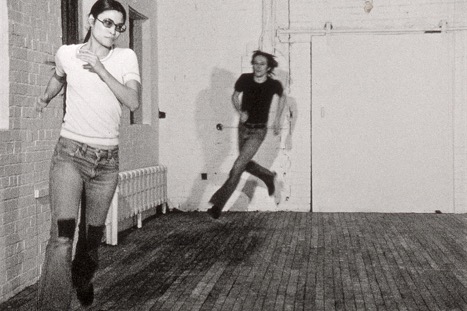 RUNNING IN O&R occupies the conjunction of three crucial arts of the 1970s: performance art, experimental dance, and independent filmmaking. Plus it is influenced by ”minimal” composers like Philip Glass and Steve Reich. This digital re-release is the full original edit.

RUNNING IN O&R started as a performance piece for Missing Associates, Dudar’s partnership with dancer/ choreographer Lily Eng. Missing Associates initiated the first wave of performance art and experimental dance in Toronto galleries in 1972. This film was shot at the Centre for Experimental Art and Communication (CEAC), the city’s ”most avant-garde” international gallery.

In RUNNING IN O&R, the performers run laps around the gallery space, keeping in step and using their natural strides. They go in and out of phase visually, as other complexities emerge.
The establishing wide shot is stationary. But the camera progressively zooms in, eventually becoming part of the choreography, switching from one performer to the other as they pass each other.

Peter Dudar began his career as a painter. RUNNING IN O&R initiated his transition from performance artist to filmmaker. Concepts introduced here culminated in his internationally lauded CRASH POINTS films.