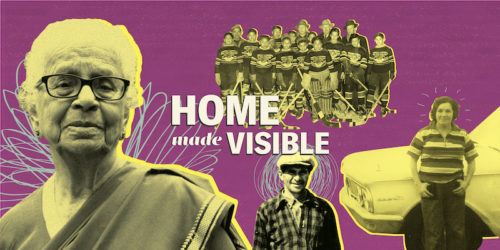 This collection of six short films examine how archival material can complicate our understandings of Canada’s many histories and identities. BIPOC communities are disproportionately underrepresented in all media. How do past images unearthed from personal and institutional archives come to shape new stories?

Funded by the Canada Council for the Arts under Canada 150, commissioned by and premiering at the 2018 Annual Regent Park Film Festival, the works in the Home Made Visible program travelled across Canada and were accompanied with public workshops on personal archiving. Program Director: Ananya Ohri, Program Manager: Elizabeth Mudenyo.

A mixed media installation Reunion; self-determination of the Black American South, by artist Melisse Watson also accompanied these six video pieces as part of this commission. More on this installation can be found in RPFF 2018 program book, which can be downloaded in the festival archive section of the RPFF website.

1. Anishkutapeu by Lisa Jodoin
Anishkutapeu is a short documentary that explores the connection between land and archives in the Innu community of Uashat in Sept-Îles, Quebec. A source of well-being, traditional knowledge, and identity, land and familial territories are an essential part of what it means to be Innu.

Lisa Jodoin is a writer/filmmaker working out of Fredericton, New Brunswick. Her short films include Tracing Blood, a video poem about Indigenous identity, and In Search of Laura Fearn. She recently completed a feature-length documentary for the New Brunswick Aboriginal People’s Council and the Urban Aboriginal Knowledge Network Atlantic.

2. Arrival Archives by Maya Bastian
Two families, similar identities. Fleeing violence, they sought refuge in Canada and began a new life. This is the experience of thousands of people in our great country and yet these stories go mostly untold. Arrival Archives is an artful exploration of newcomer arrival stories, told through a multi-generational viewpoint. The stories intertwine as one, illustrating that Canada’s cultural landscape is a communal experience shared by many different faces.

Maya Bastian is a writer, filmmaker and artist most interested in exploring themes of community and culture. Her recent film Air Show received press and widespread attention for its look at refugee reactions to the National Air Show. She is a 2017 recipient of the Al Magee Screenwriter Mentorship and participated in Reelworld Film Festival’s Emerging 20 for 2017.

3. Caribou in the Archive by Jennifer Dysart
In Caribou in the Archive​, rustic VHS home video of a woman hunting caribou in the 1990s is combined with NFB archival film footage of northern Manitoba from the 1940s. In this experimental film, the difference between homemade video and official historical record is made obvious, and yet at the same time, their boundaries are reduced. Northern Indigenous women hunting is at the heart of this personal found footage in which the filmmaker describes the enigmatic events that led to saving an important piece of family history from being lost forever.

Jennifer Dysart is a director of short films and works as a set dresser/decorator in projects of all scales. She is a Board Member at the Factory Media Center in Hamilton, Ontario. Jennifer was born in Alberta, raised in BC and has Cree roots from South Indian Lake, Manitoba. She is an archives enthusiast with a deep love of found footage and experimental films.

4. Landscape of Desire by Aeyliya Husain
Landscape of Desire is a short experimental documentary film that combines locational filming, archival footage and photographs with narration, to tell the story of what home means and how the land defines the person. As the land changes around him, the one thing that remains constant for Mahfuzur is his home.

Aeyliya Husain is a documentary filmmaker whose work focuses on issues of representation, war, women and photography. She has exhibited at festivals both nationally and internationally. She started her career with the NFB.

Parastoo Anoushahpour and Faraz Anoushahpour have worked in collaboration since 2013. Using various performative structures, their projects explore collaboration as a way to upset the authority of a singular narrator or position. Recent work has been shown at New York Film Festival, TIFF , Gallery 44 and Trinity Square Video in Toronto.

6. Portrait of a Zamboni Driver by Nadine Arpin
Growing up in Colombia, Luis España dreamed of a different life. When he married a Cree woman from Canada and returned to her small town, Luis found a sense of place driving the Zamboni at the local ice-rink where hockey is King.

Nadine Arpin is a Two-Spirited Métis filmmaker based in Sioux Lookout, Ontario where her film production company Cedar Water Films is located. Since 2014 she has been producing and directing independent short films which have screened both nationally and internationally.